The Suedehead is a great men’s haircut steeped in the rich history of British street culture. Barber Dale Ted Watkins gives a history of the haircut, a longer crop made popular in the 1970s.

The Suedehead subculture was an early-1970s offshoot of skinhead subculture in the United Kingdom. The original Skinhead movement in the UK had its roots deep in the Mod movement which embraced black culture and music, especially jazz, R’n’B and soul music. The word Mod, or Modernist, was originally attached to fans of Modern Jazz in the mid-1950s who often had ‘rumbles’ with the ‘Trads’ before the motorcycle-riding Rockers became the enemy. As reggae and ska gained popularity in the underground subculture, Skinheads could be seen in the dance halls with the newly arrived Jamaican immigrants, before the look was adopted by the far more unsavoury far-right National Front members and football hooligans in the 1970s and 1980s.

Whilst sharing similarities to 1960s Skinheads, Suedeheads grew their hair long and dressed more formally. Although often working class like skinheads, some had white collar jobs so were required to have a less aggressive haircut than the severe and much maligned Skinhead. The original Skinhead was not completely shaven but had a short, smart haircut.  The inspiration may have been a combination of the college boy haircut favoured by the Mods and military-style haircuts before reducing down to the more literal shaved Skinhead worn by Bovva Boys, NF members and the 1980s Oi! subculture. 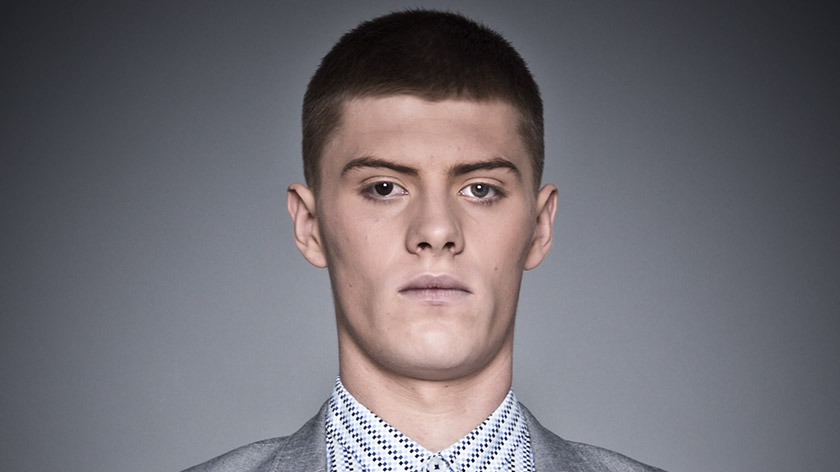 HOW TO CUT A SUEDEHEAD / SCISSOR OVER COMB TUTORIAL

The Suedeheads wardrobe varied from the Levi’s, Harrington jackets and Dr Martins steel toe capped boots worn by the Skins; preferring brogues, loafers or basket weave Norwegians with suits, especially in check patterns such as Prince of Wales and dogtooth, and other dressy outfits as everyday wear and not just at dance halls. Crombie-style overcoats and sheepskin coats became common, while shirts often had large button-down collars. The most common style was a large windowpane check worn under a tank top, accompanied by Levi’s Sta-Prest trousers and coloured socks — such as solid red or blue — instead of plain black or white.

Suedeheads shared the Skinheads’ interest in reggae, soul music and ska, but slower and more soulful. As glam rock grew in popularity in the 1970s, Suedeheads also listened to bands such as The Sweet, Mott the Hoople and Slade (which was itself a Skinhead band in its early days), before being adopted and adapted within the mainstream. Of course, Morrissey also celebrated the Suedehead with his 1988 song of the same name.

With modern youth culture far less tribal and subculture influenced hair more acceptable, the short smart Suedehead continues to be flattering to and popular with men of all ages.

I hope you enjoy this simple yet technical haircut as much as I enjoyed cutting it for you.

Join MHD today for more than 500 online hairdressing tutorials from the biggest names in the hair industry!