If there’s one person in history who has had a lasting impact on hair fashion it has to be the last Queen of France, Marie Antoinette. Prior to her final cut… from the guillotine, Marie Antoinette and her hairdresser Leonard Autié wowed and influenced the royal court with hair creations that exceeded the imaginations of even today’s avant-garde artists. Her lasting legacy to the world of hairdressing in the Pouf hairstyle – a style that continues to this day on the catwalks and in the fashion press, if not on the streets.

The Pouf also influenced the Beehive hairstyle, made popular by Dusty Springsteen in the ‘60s, The B52s in the ‘80s and Amy Winehouse in the ‘00s.

Born Maria Antonia Josepha Johanna (1755 – 1793), Marie Antoinette was an Austrian Archduchess and the second youngest child (of 16) of Austrian Empress Maria Theresa. As was common in Europe at the time, royal marriages were politically arranged, and so Maria married the heir to the French throne, Louis-Augusta, who ascended the throne as Louis XVI in 1775. 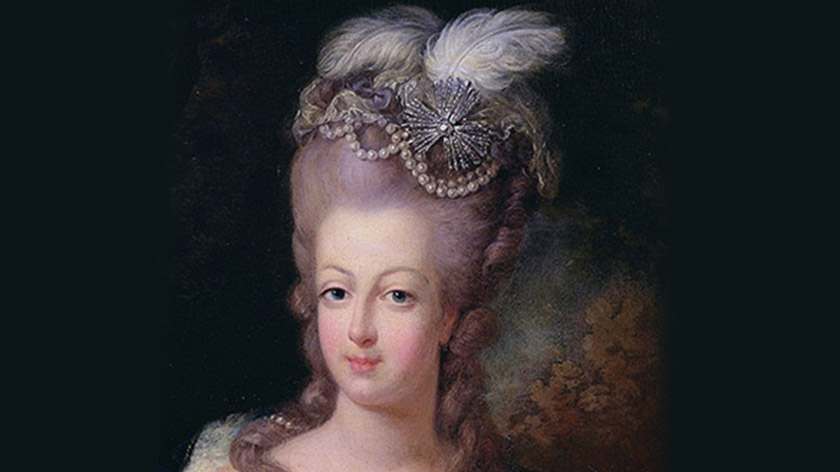 For the coronation, Marie Antoinette employed the services of Paris hairdresser Leonard Autié to create a large Pouf hairstyle. He’d previously invented the style for the Duchess de Chartres, using 14 yards of gauze, statuettes of the baby Duc de Beaujolais in his nurse’s arms and an African boy, along with models of a parrot and a plate of cherries.

With Marie Antoninette’s adoption of the style, it became tremendously fashionable not only in France but across Europe. Ladies wore ever larger and more decorated, complicated versions. Marie Antoninette stayed at the forefront of the trend though, incorporating model ships, feathers and figurines. Many creations reached a height of 60cm, making travelling by carriage a logistical nightmare. Sleeping meanwhile, required several pillows to allow upright posture in bed and maintain the barnet until the next appointment. 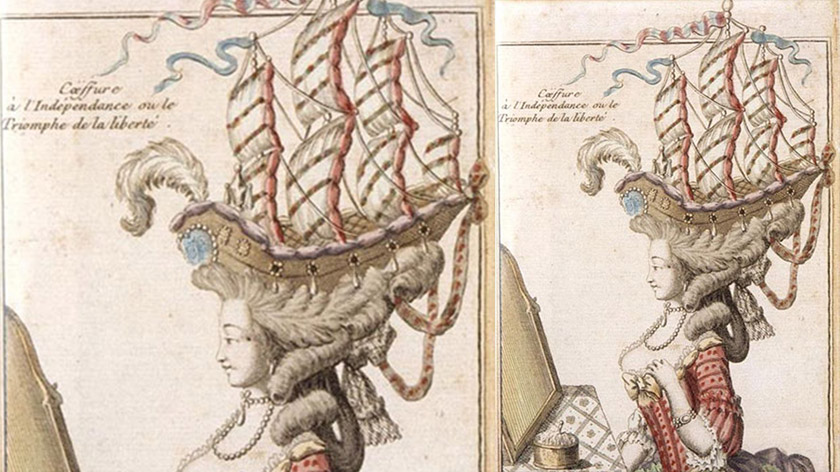 Models were often added to the Pouf. Marie Antoinette wore a ship to celebrate a naval battle

Léonard-Alexis Autié, or Autier, or Monsieur Léonard (1751- 1820) was Marie Antoninette’s hairdresser and inventor of the Pouf. His Paris salon was so busy, that he was only able to attend to the Queen’s needs on a Sunday, sending along his youngest brother, Jean-François during the week. 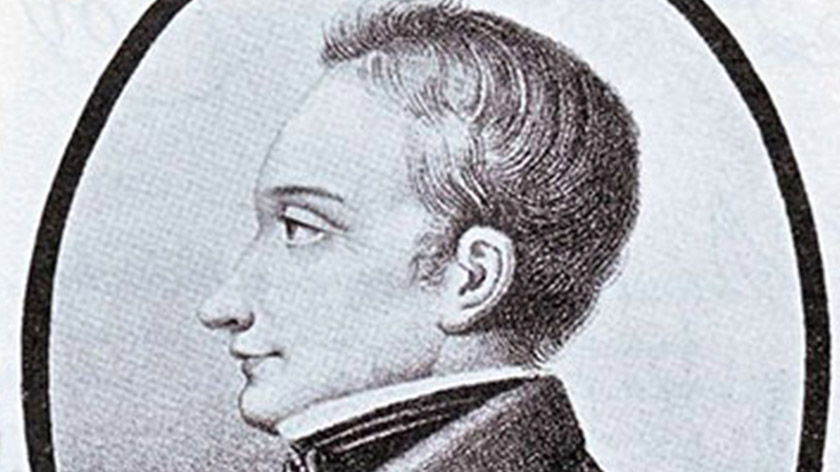 Leonard Autie, Marie Antoinette’s hairdresser and inventor of the Pouf

Like modern successful hairdressers, he also had an Académie de Coiffeur and by 1787 he had amassed enough wealth to no longer need to dress hair. Instead, and with the Queen’s encouragement, he shifted his focus to opera and theatre ownership until the start of the French Revolution.

Following the death of the Queen he left France, returning occasionally until Jean-François met his death on the guillotine. Following that he stayed away until the restoration of the Louis XVIII in 1814, whereupon he lived in Paris until his death six years later.

Needless to say, the Pouf was a convoluted time consuming hairstyle to create:

Create the base with a very thin metal frame to structure the shape.

Add a triangular pillow, or pouf, as support.

Pad the frame and intertwine with pomaded false hair ‘postiches’, taking in the sitter’s real hair.

Repeat the process on the lovelocks in a similar fashion.

Finish with white or grey powder, and add decoration such as a ship. 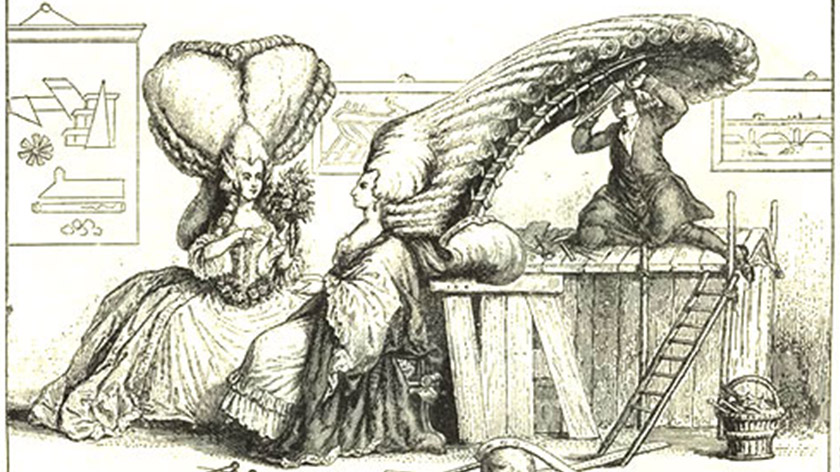 The Pouf was lampooned in newspapers, especially towards the start of the French Revolution

“Take some beef marrow and remove all the bits of skin and bone. Put it in a pot with some hazelnut oil and stir well with the end of a rolling pin. Add more oil from time to time until it is thoroughly liquefied. Add a little essence of lemon. Bear grease can be a substitute for bone marrow.”

A more expensive version consisted of pork fat, which was less smelly. Pomades based on animal ingredients did, however, have the unfortunate habit of attracting vermin, particularly during the night in bed.

While the Pouf may not be a common fashion staple on the streets of Paris, London or New York, it is frequently the inspiration for fashion shoots and shows. MHD has a couple of inspiring videos demonstrating more modern versions. No pork fat or beef marrow required! 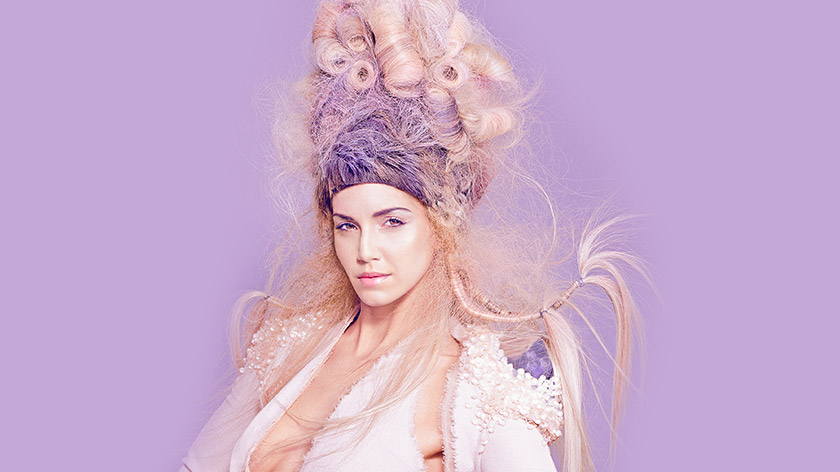 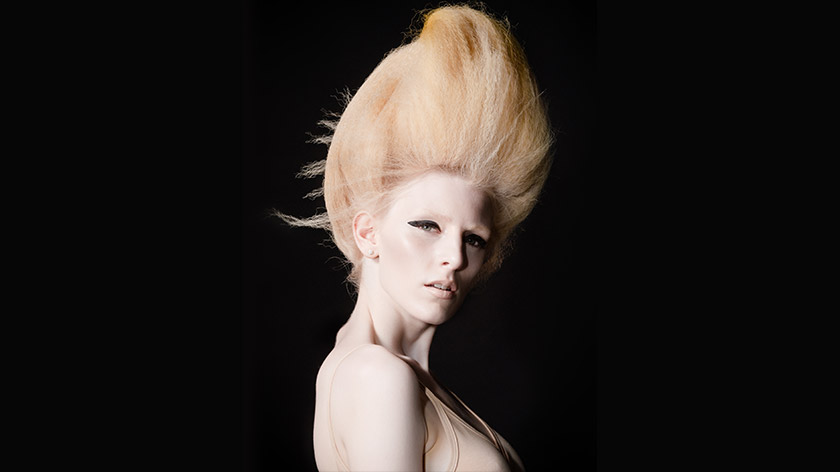 How To Do A Crimped Structure Editorial Hairstyle

Join MHD today for more than 500 online hairdressing video tutorials from the biggest names in the hair industry!